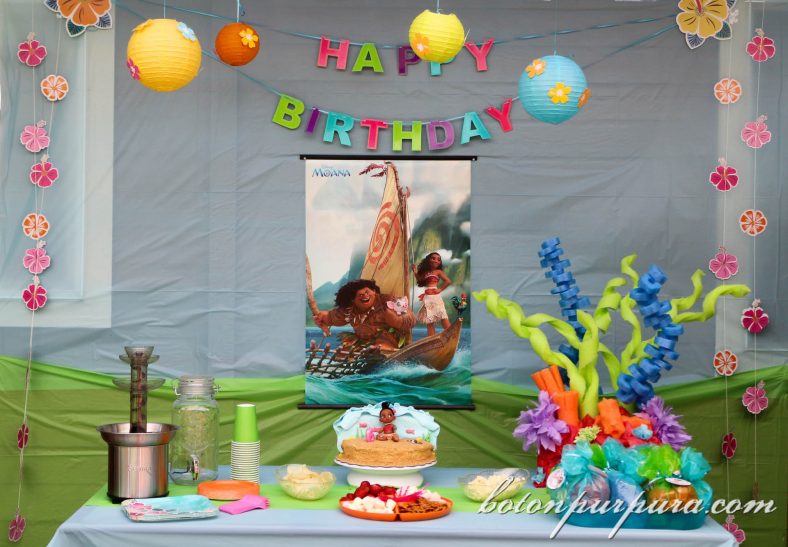 Moana is the favorite movie in this house at the moment, especially for my two smallest children, so it had to be the theme of my daughter's 6th birthday.

While I don't feel that I prepared as much as I have done on other occasions, I am very happy with the results. The girls had fun enough and most importantly, the birthday girl felt very special on her day. 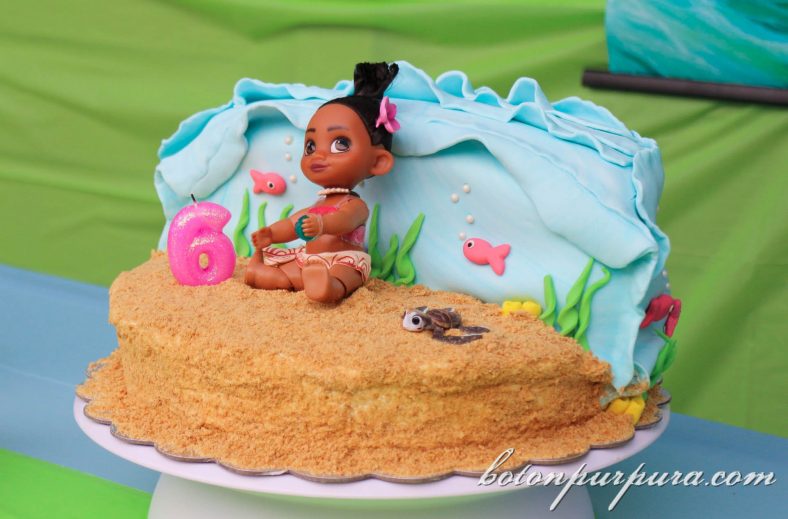 Let's start talking about the birthday cake . In this house the cake decorating has become a very important part of the celebration, or at least that is what it is for me since I enjoy it so much. 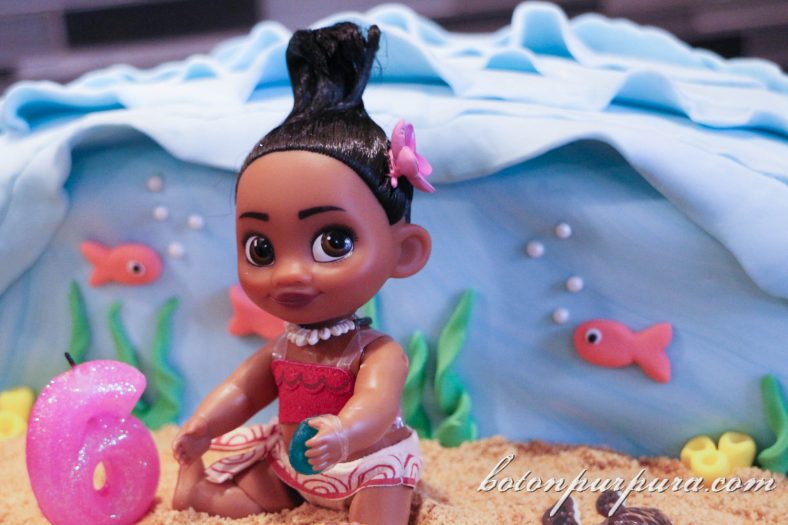 I made it using a tutorial video from Cakes Step by Step. I did not put the cream on the waves, nor the candy rocks., and the only Moana that I liked was this doll from a collection that is sold in the Disney store. I decided to sit it down so it isn't as large in relation to the cake. 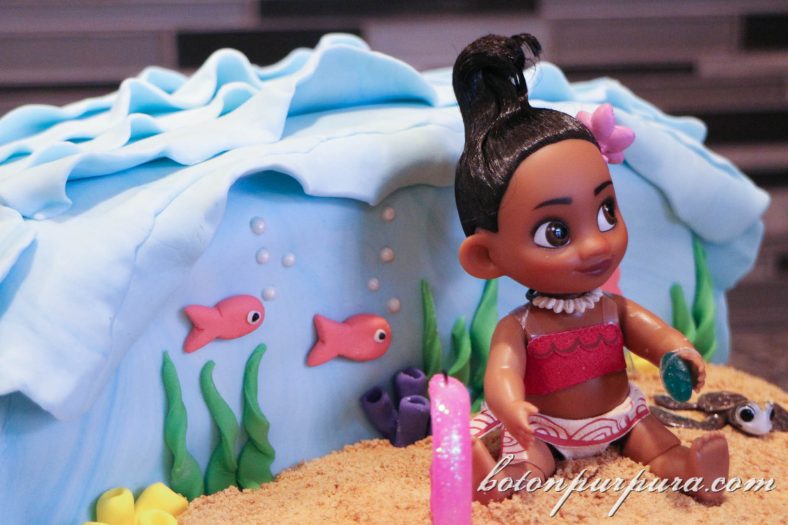 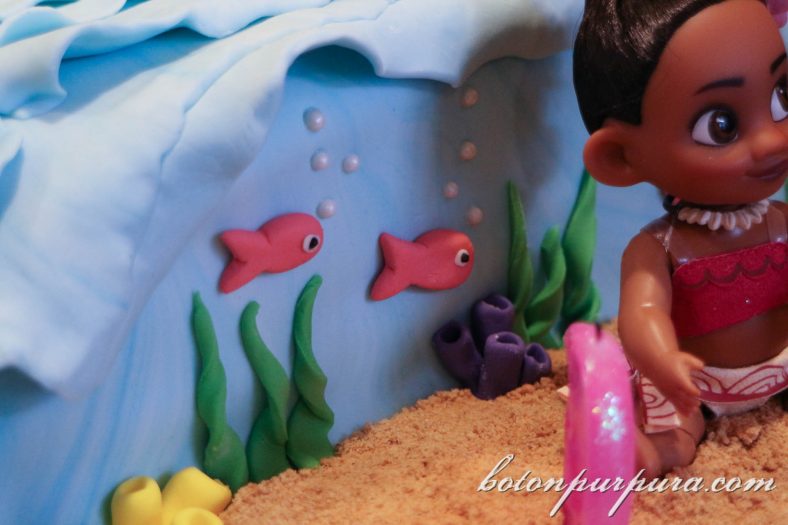 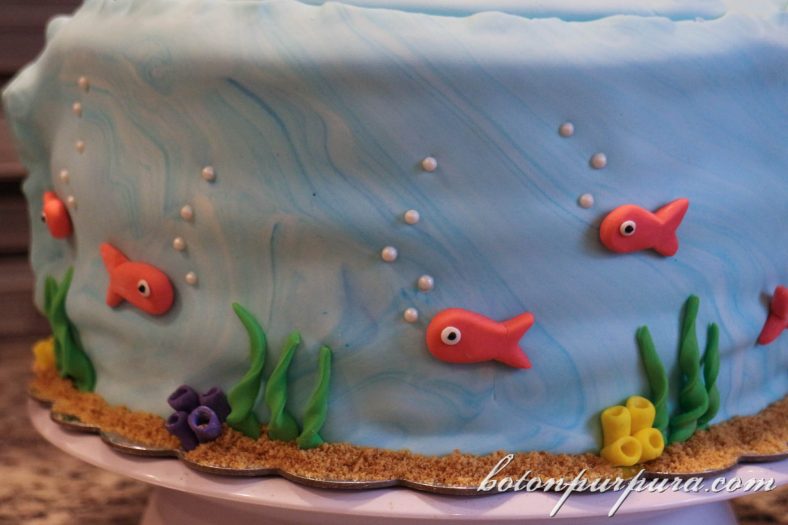 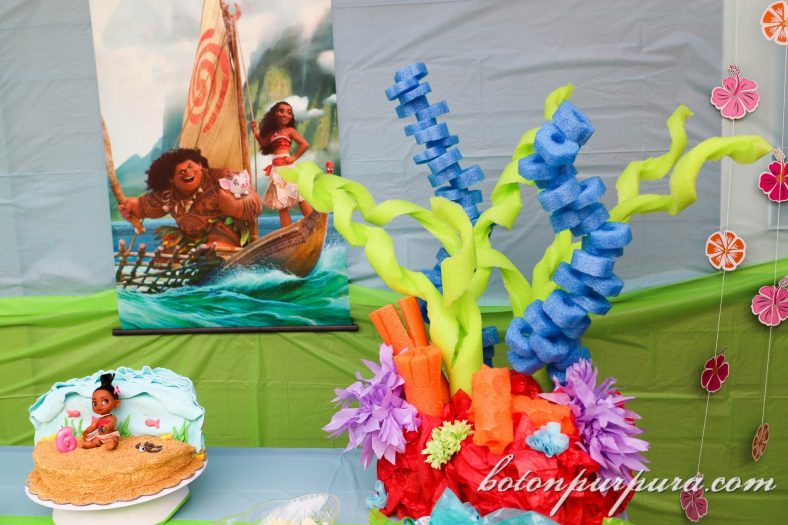 Coral reef. I made this decoration simply because during my search for birthday ideas, I found how to make foam coral reefs from pool noodles, and I still had a bunch of noodles in my house from a prior birthday.

For games, I looked for ideas related to the film, but I couldn't find much, so I started to think about what happened in the movie that could be turned into games. I decided that the games would follow the events of the film, so the kids could sort of relive the movie. 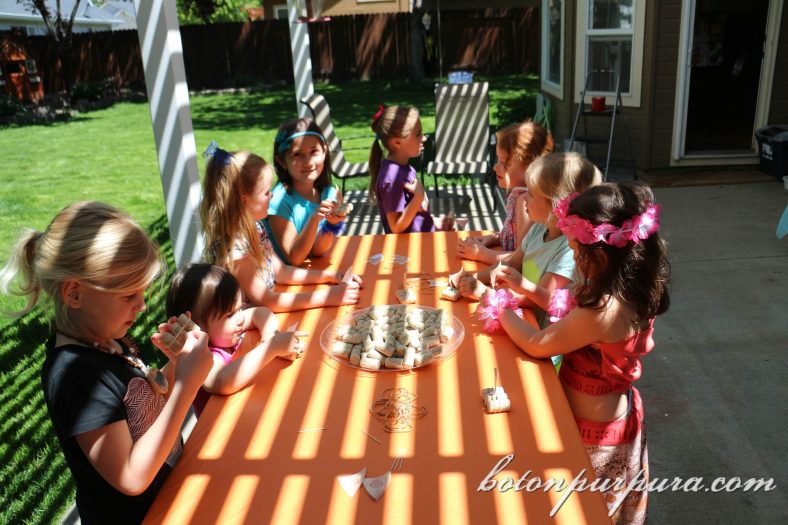 Moana's adventure begins getting on a boat to go in search of Maui. The first activity was to build a boat with three corks, an elastic, a toothpick, and a Moana style sail that I printed on paper. In Fazendo a Nossa Festa you can find the sail to print. I was afraid that it would very difficult to put the elastic around the corks, but with a little help all could do it. 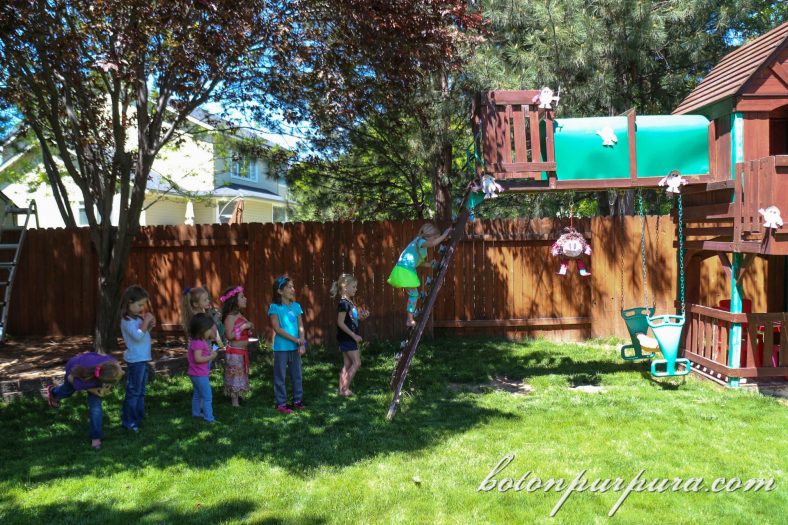 After finishing the boat, We could explore the sea and find Maui, but the Kakamora took the heart of Te-Fiti from us, so we had to go to get back it! The swing set became the Kakamora boat. The girls went to retrieve the heart and put it within a necklace that I had given each girl previously (all made of paper).

After having recovered the heart, it was time to go get Maui's fishhook! 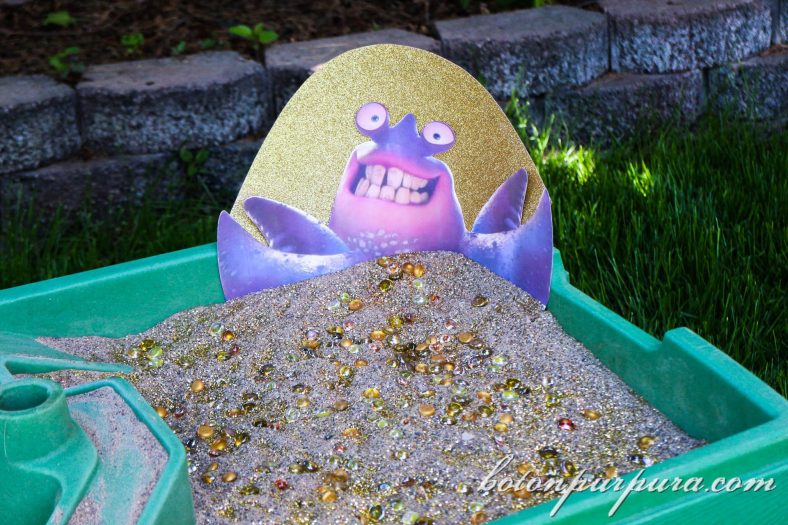 The giant crab Tamatoa had hidden the hook in the sand with other precious objects. The girls looked for the pieces of a puzzle of the Fishhook and together they worked to put it together. 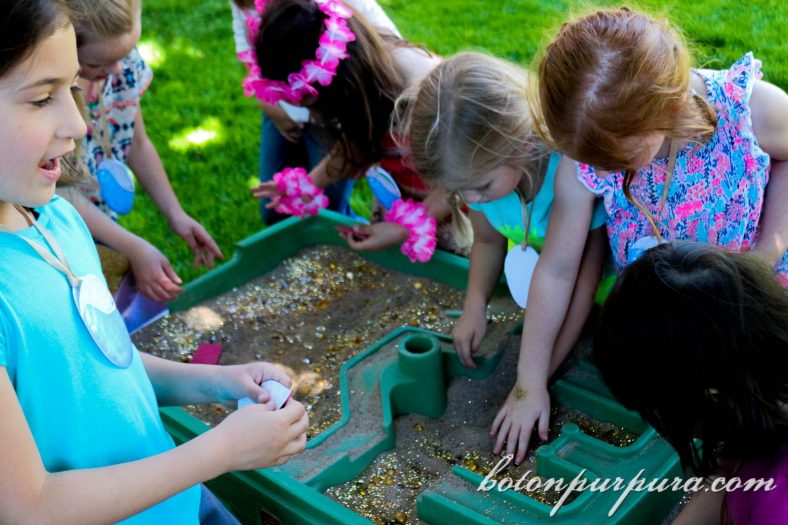 I didn't have the sandbox perfectly planned out at first, really until the very last minute. I just thought that I needed a drawing or something that represented Tamatoa and the sand would need many bright things. So with a bag of golden stones and a bottle of glitter the sandbox turned out perfect! 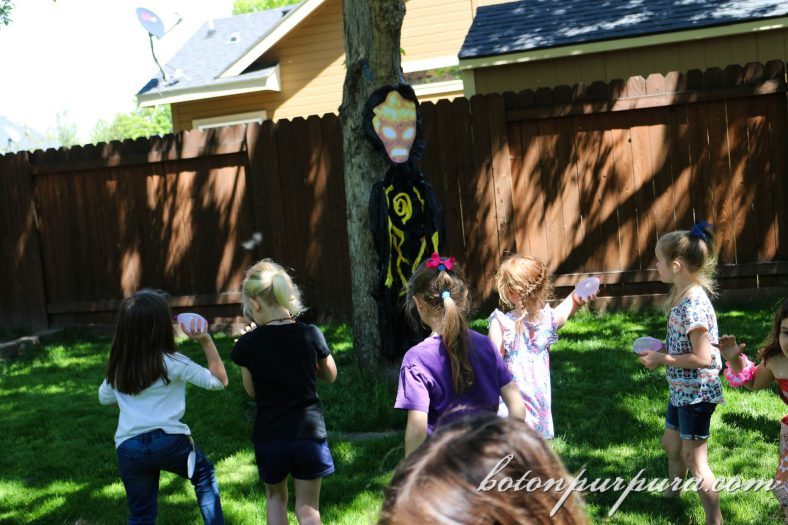 Then it was time to deal with Te-Ka. The only way to keep the lava monster under control is with water, so we armed the girls with water balloons and they practiced their marksmanship. For this game I used a cutout of the monster's face, a black plastic tablecloth and some yellow crepe paper. The water balloons we used were Bunch O' Balloons. They are super easy to use and save you time and effort when it comes to filling the balloons with water. The only recommendation I found while reading about them was to wait to fill them when you're ready to use them since they leak water over time. 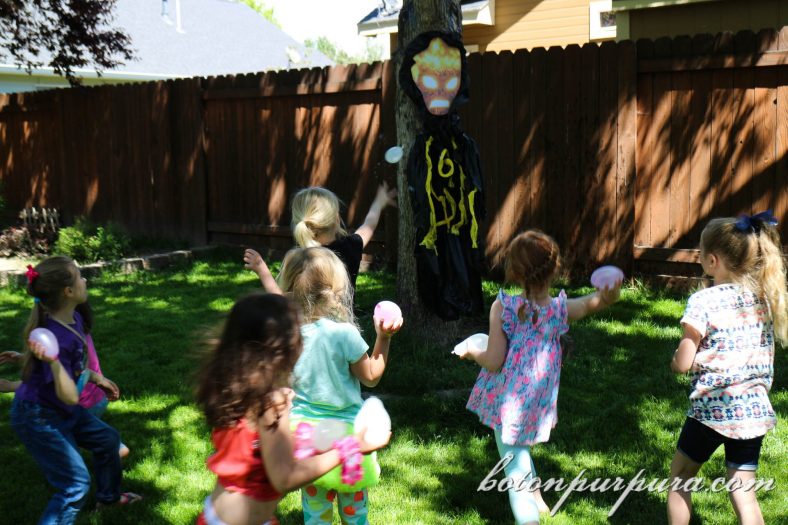 Finally the piñata. This was the birthday girl's grandmother's creation. While I was enjoying a few pleasant days in Cancun with my spouse, my mom took care of my 4 girls and made this adorable Kakamora piñata. For the frame she used a paper lantern instead of the traditional method of making piñatas. 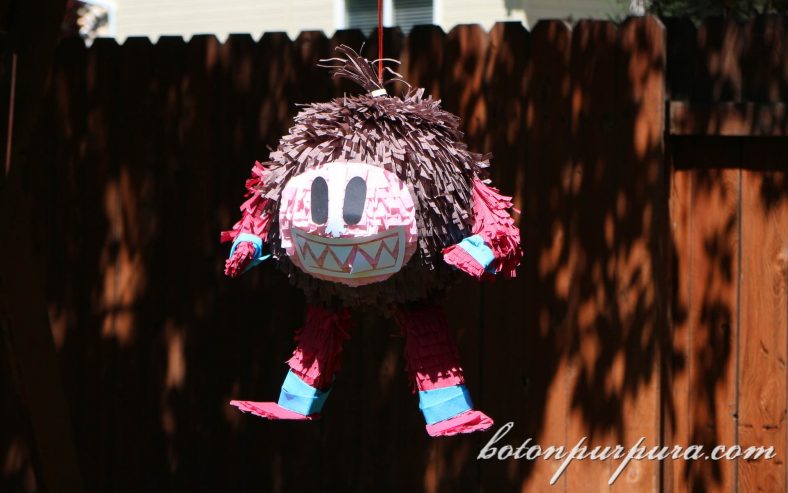 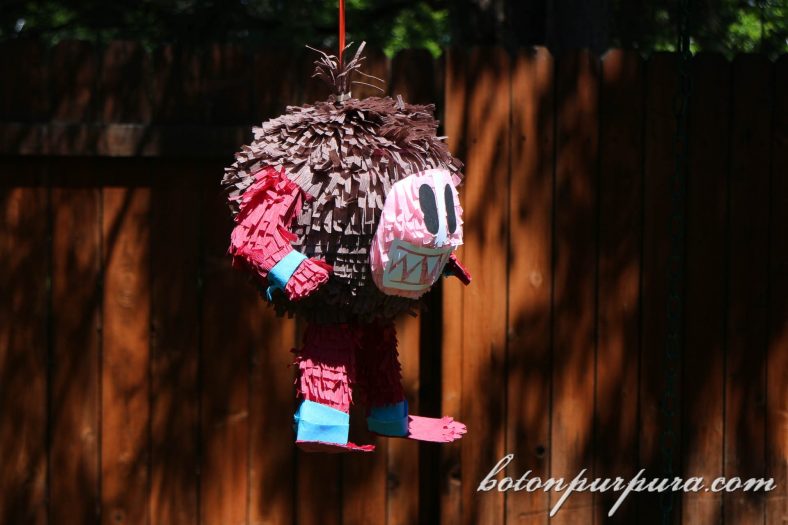 For the gift bags, I just put a couple of sea animals, a small plastic boat and a Hawaiian-style necklace inside a plastic bag. 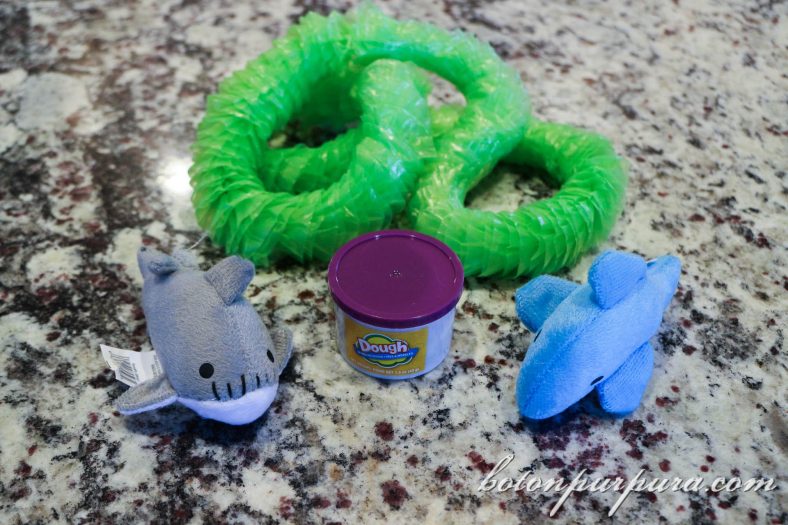 For some reason I always forget to take a photo of the finished gift bags, I even made cards with a drawing of Moana thanking each guest for coming to the party. Someday I'll remember to better document the things that I do, but in my defense I was "a little" preoccupied making sure that girls had a great time at the party!