This Saturday we celebrate the birthday of my eldest daughter, and of course the theme of the party was the movie FROZEN. If you have not seen the film, there still time for you to run to see it. As always, it was so fun to plan it, and I received so much help with ideas from Pinterest, and one or two of my own creations. 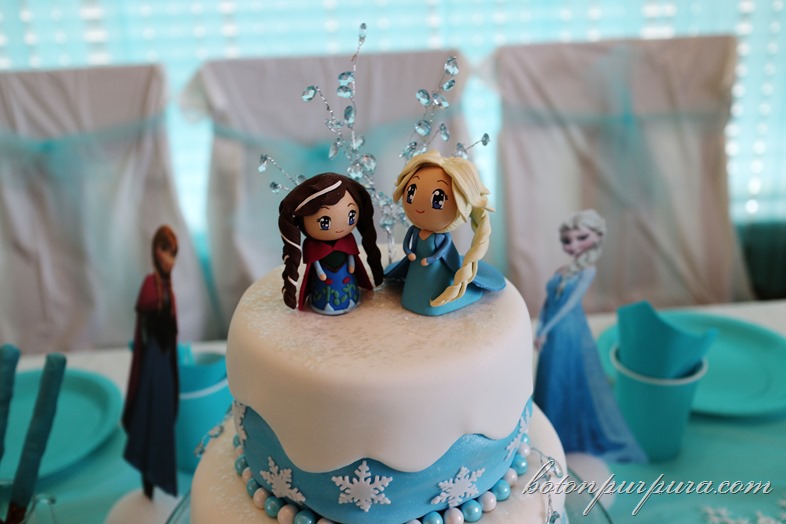 Let's start from the top. This chandelier is my creation. Elsa in the film creates her own ice castle, and in the center is a magnificent chandelier. Mine is not as magnificent, but I thought it would be nice representation of it for the party. 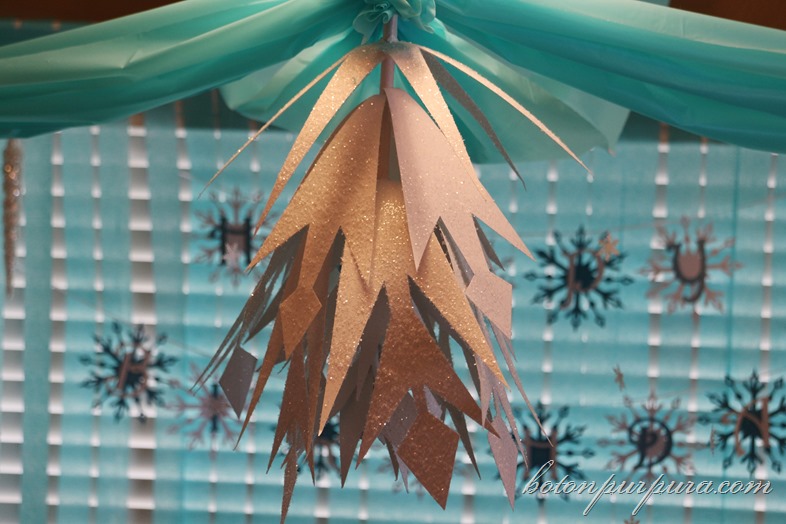 I also bought a snowflake paper punch to be able to hang them from the ceiling. 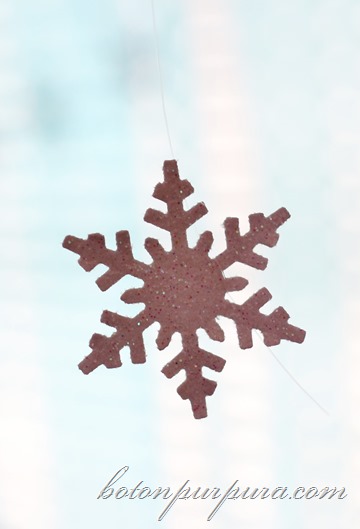 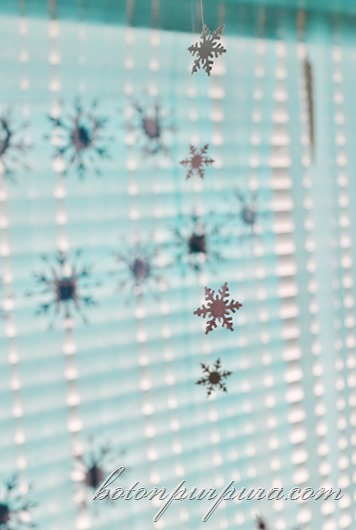 None of the ideas I found on the internet for how to do the birthday garland were convincing, and then it occurred to me to just cut snowflakes with my machine and glue the letters in the middle. I used glitter paper for the snowflakes and pearlescent paper for the letters. 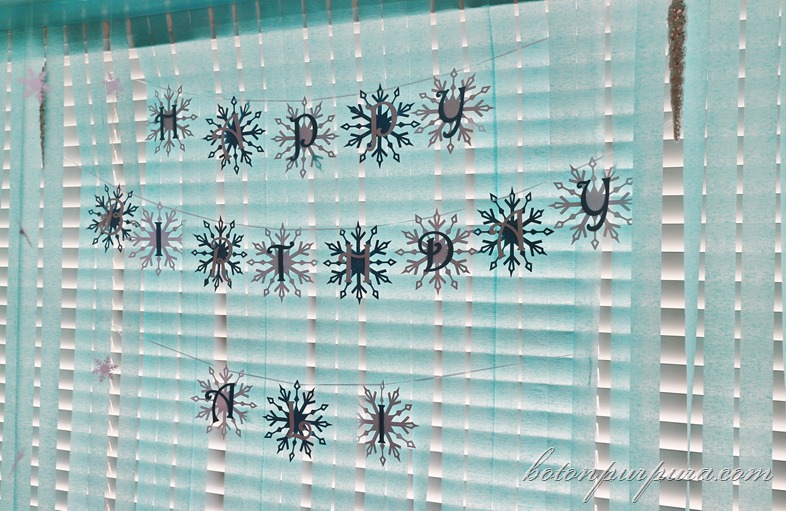 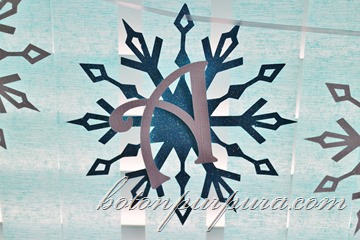 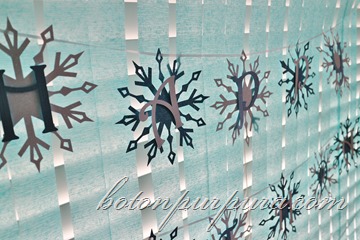 Here I still had not put everything on the table, but it's the only picture where almost everything can be seen. 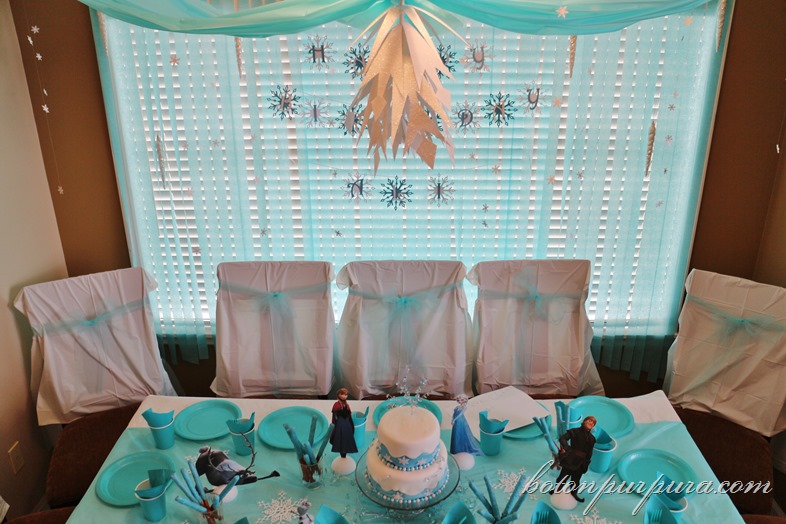 The birthday cake was, as usual, made by me. Everywhere, even at the Disney store, they are sold out of Frozen stuff, and I had the intention to purchase figurines to decorate the cake, so I had to find another solution. I ended up making cold porcelain dolls using these videos on youtube: Anna and Elsa. 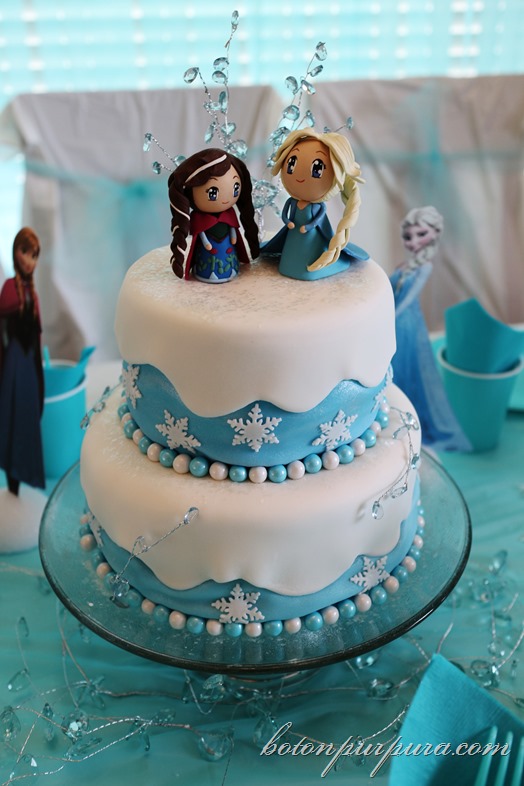 You can see I printed cardboard characters and used Styrofoam balls cut in half placed on the table to decorate. Something that gave it a very nice touch were these snowflakes that my mom sent me. 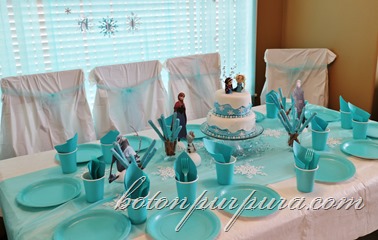 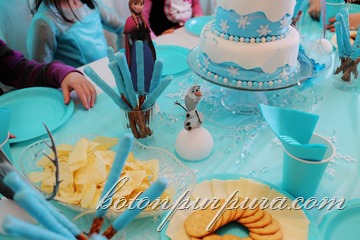 For food, I covered pretzels with blue colored white chocolate, I made blue gelatin, some crackers with cheese, fries and a drink made from Sprite and juice packets of powdered Hawaiian Punch. I also thought to serve some baby carrots with a little ranch dressing but the table already looked pretty full. 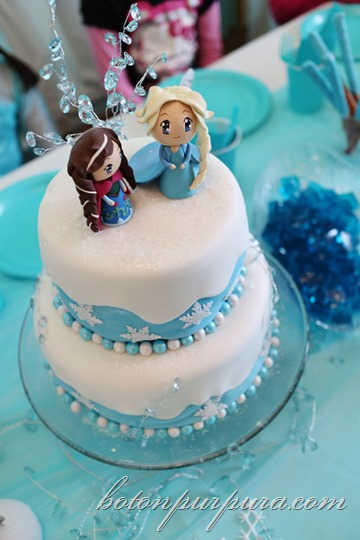 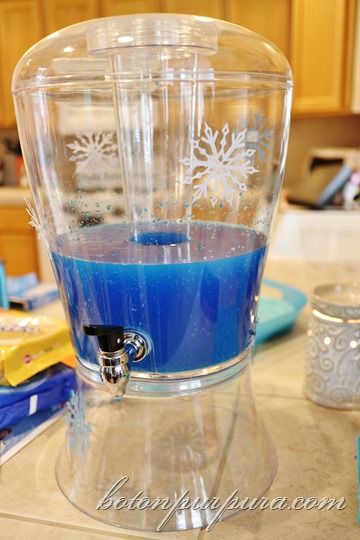 Here is the beautiful birthday girl. I could not resist the temptation to make the Elsa dress. 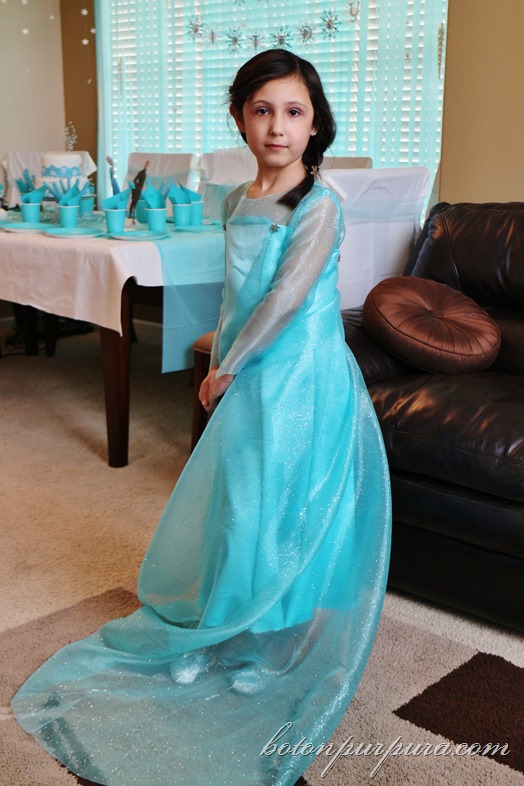 One of the snowflakes that I used on the table. 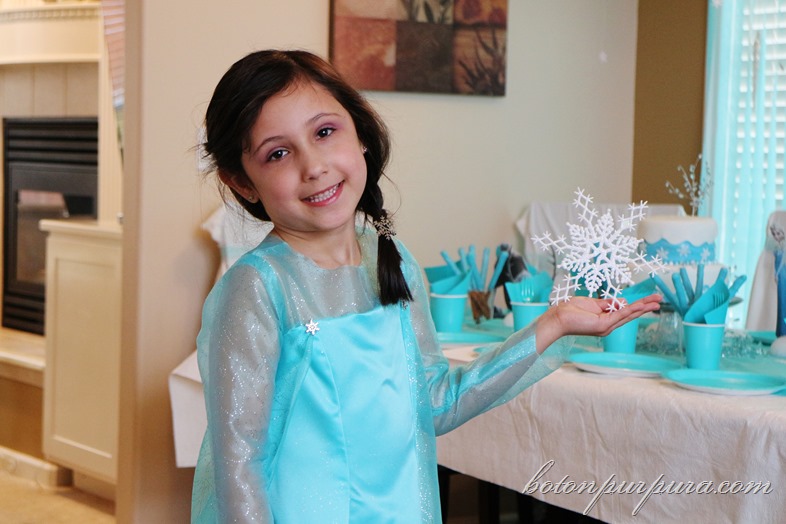 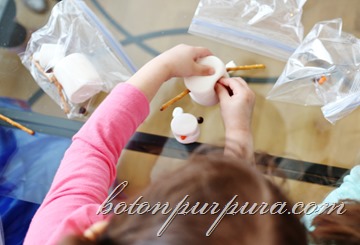 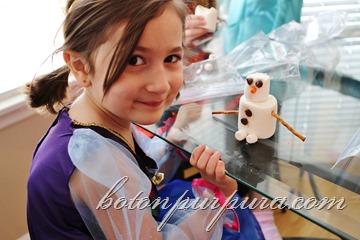 With marshmallows and chocolate pretzels, they made their own snowmen. 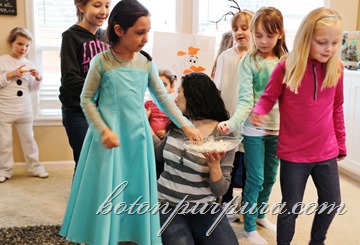 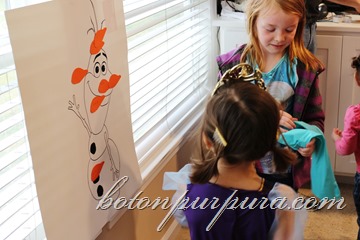 Another game was to throw the most small marshmallows onto a few boats on which I had glued a picture of the Marshmallow monster. (unfortunately I do not have a good picture of this). I could not leave out the game of Stick the Nose on Olaf. 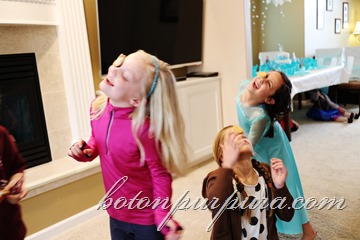 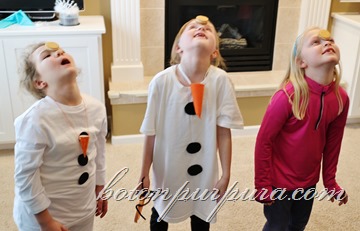 This game is not really related to the theme, but it's fun, it is to put a cookie on your forehead and try to eat it without using hands. 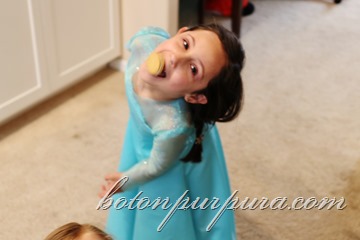 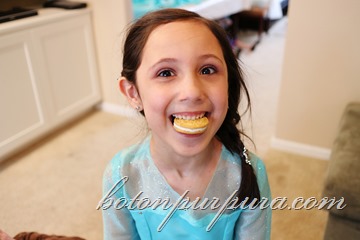 We also played to see who could build the highest tower using ice cubes. I had a couple more games that we didn't play because of time: find the 9 differences between a pair of photos, and keep the balloon in the air. 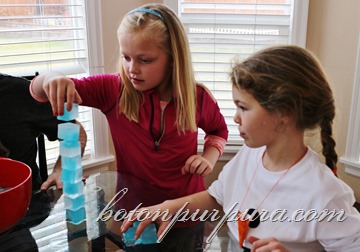 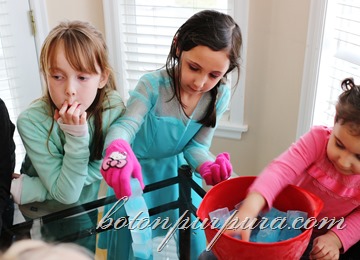 For the surprise, I made these necklaces. I just bought this set from Just Becuz, I printed the photos of the characters and I put it all together, very easy. 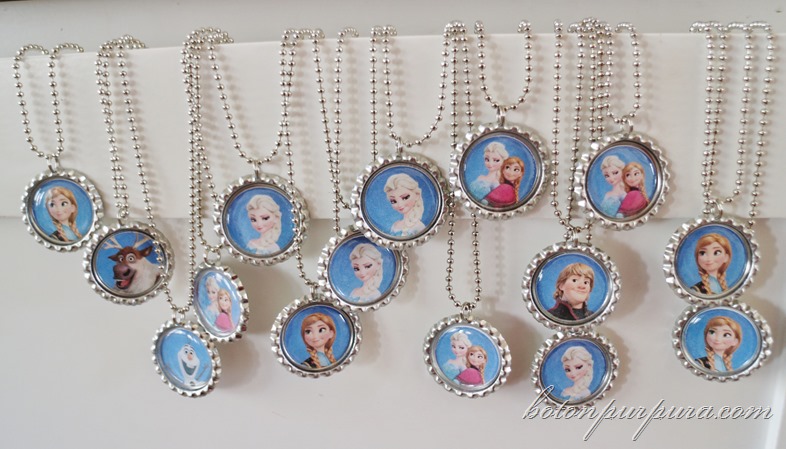 It was hard to buy things related to this theme right now, I have this idea that it is not necessary to be giving away lots of cheap toys that are only going to end up in the trash, This makes it even more difficult to find things to put in the bags without spending a lot of money (especially since I spent a lot on the party itself) so I decided to just put a few things I found cheap and that my daughters like to play with or eat (I do not like to over do on the candy, because I don't like to see my children eat so much candy). The girls were very happy with what they found in their bags, so I think it was enough. 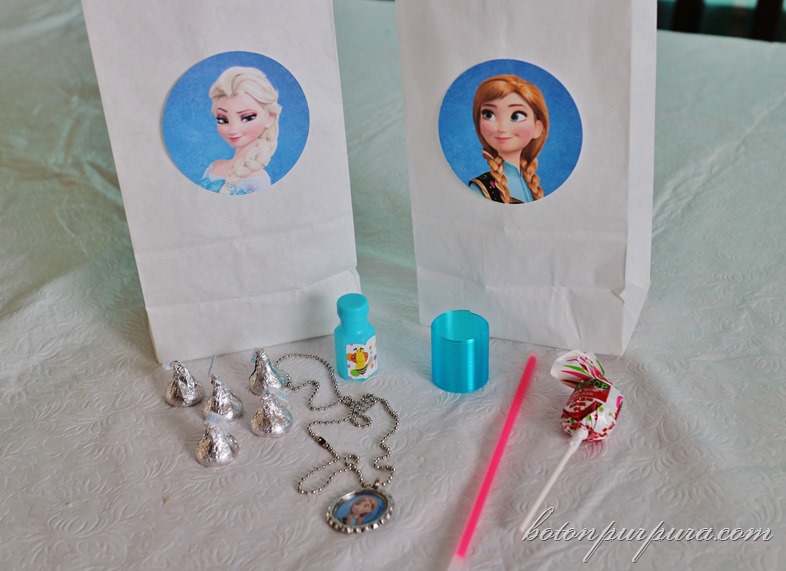 I have to say that the party was a success. The decorations turned out as expected, my husband helped me a lot with all the games, and most importantly my daughter really enjoyed her party.

In fanpop you can find very good images from the film, You can also see my Frozen folder on Pinterest to find many more ideas.